This Friday, February 14, at 6 p.m. in Sutter Creek, Argonaut will close out the regular season against Amador, looking to extend a Big Game rivalry win streak that stretches all the way back to 2008 and includes a 95-26 thrashing in the first meeting of the season between the two teams on January 24.

Amador’s last victory in the Big Game series against Argonaut came on February 16, 2007.

The Mustangs clinched at least a share of this year’s MLL championship with a 57-19 victory over Bret Harte on Tuesday, February 11 in Angels Camp.

Entering Friday’s rivalry game against Amador, Argonaut (23-4, 8-1 MLL) holds a one-game lead over Calaveras in the league standings thanks to a 60-49 victory in a head-to-head clash with Calaveras on Friday, February 7 in Jackson.

“Our girls had to relearn how to run half-court man-to-man defense in order to contain the athletic and quick guards on Calaveras,” Argonaut coach Morgan Roots said.

Argonaut and Calaveras will both advance to the Sac-Joaquin Section playoffs, which begin next week. Playoff brackets are expected to be posted at cifsjs.org by this Saturday evening, February 15.

The Buffaloes celebrated Senior Night on Tuesday, February 11 in Sutter Creek, recognizing seniors Jordan Cass, Addy Maleske and Ariana Leggett prior to the game against the Wildcats. Maleske scored a team-high 11 points for Amador (2-22, 0-9) and Cass added eight points. 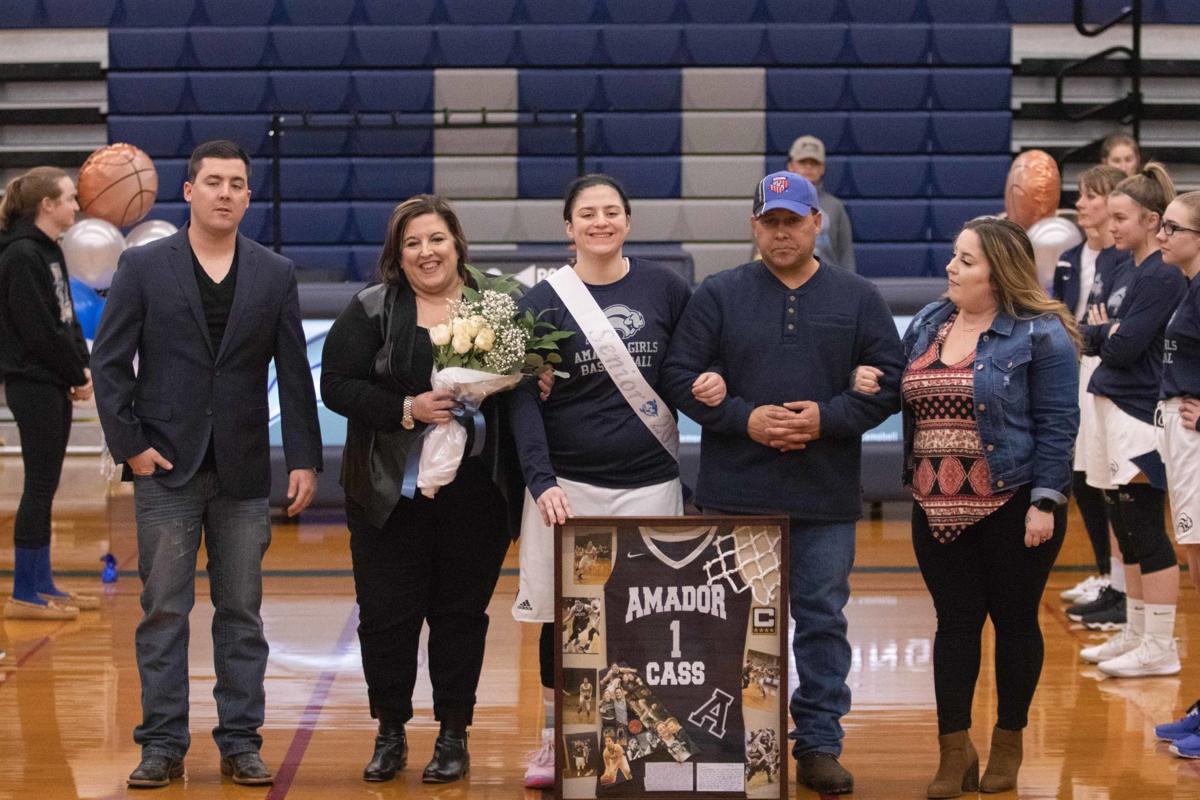 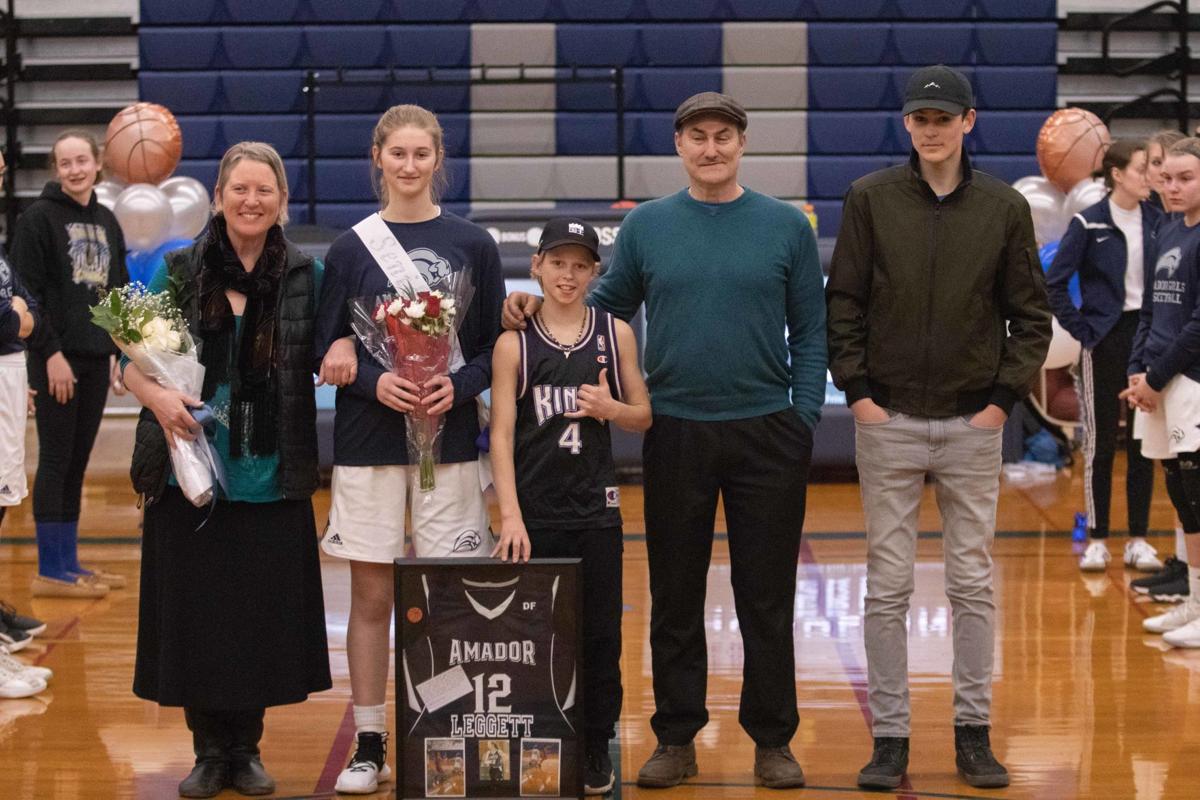 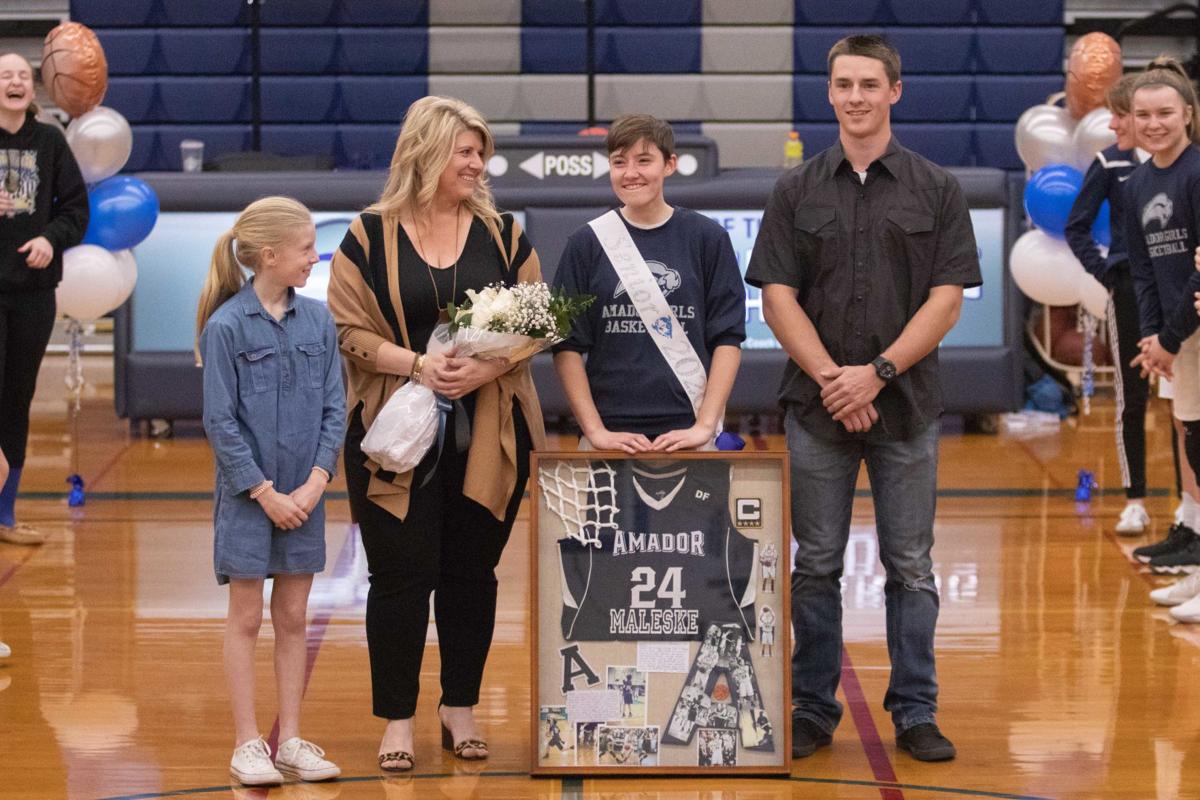 The Amador High School girls basketball team recognized its three seniors - Jordan Cass, Addy Maleske and Ariana Leggett - prior to its game on Tuesday, February 11, 2020 against Sonora. Check out these photos from the ceremony contributed by Carlton Leggett.

On Senior Night in San Andreas, 10 different players scored for Calaveras, which recognized seniors Avery Cooper, Skyler Cooper, Gabriella Malamed, Frankie Pekarek and Muriel Strange prior to the victory over the Bears on Tuesday, February 11.

Senior Jordan Cass hit four 3-pointers and scored 18 points for the Buffaloes in a loss to the Bears on Thursday, February 6 in Tuolumne.

The Mustangs rode a hot start to the win on Tuesday, February 11 in Jackson, outscoring the Bullfrogs 20-10 in the opening quarter.

Tuesday’s win for Argonaut, coupled with Amador’s loss at Sonora, pulled the two Amador County rivals into a third-place tie in the MLL entering their Big Game showdown to close out the regular season this Friday, February 14 at 7:30 p.m. in Sutter Creek.

The Mustangs have won 18 straight rivalry games against the Buffaloes, including a last-second 60-59 victory in the first meeting between the two teams this season on January 24 in Jackson. Amador’s last win in the rivalry series came on January 25, 2013.

While the winner of this Friday’s Big Game will most likely finish in third place behind Calaveras, which can lock up second place with a win over rival Bret Harte this Friday, and unbeaten Sonora, which has already clinched the outright MLL title, both Amador County squads will advance to the Sac-Joaquin Section playoffs, which begin next week. Playoff brackets are expected to be posted at cifsjs.org by this Saturday evening, February 15.

Calaveras won a key showdown in the race for second place in the MLL with a win over the Mustangs on Friday, February 7 in Jackson.

The Buffaloes rode a strong start to the win on Thursday, February 6 in Tuolumne. Senior guards Drew Andrews and Cameron Thetford scored 18 points each for Amador (17-9, 5-4).

Calaveras solidified its hold on first place in the MLL with a win over the Mustangs on Thursday, February 6 in Jackson. Sophomore Paytin Curran was a dominant force inside with 21 points and 18 rebounds. Also for Calaveras, sophomore Randi Adams scored 18 points.

Calaveras (6-1 MLL) closed out its season with a home game against Bret Harte on Thursday, February 13, needing a win to claim the outright MLL championship.