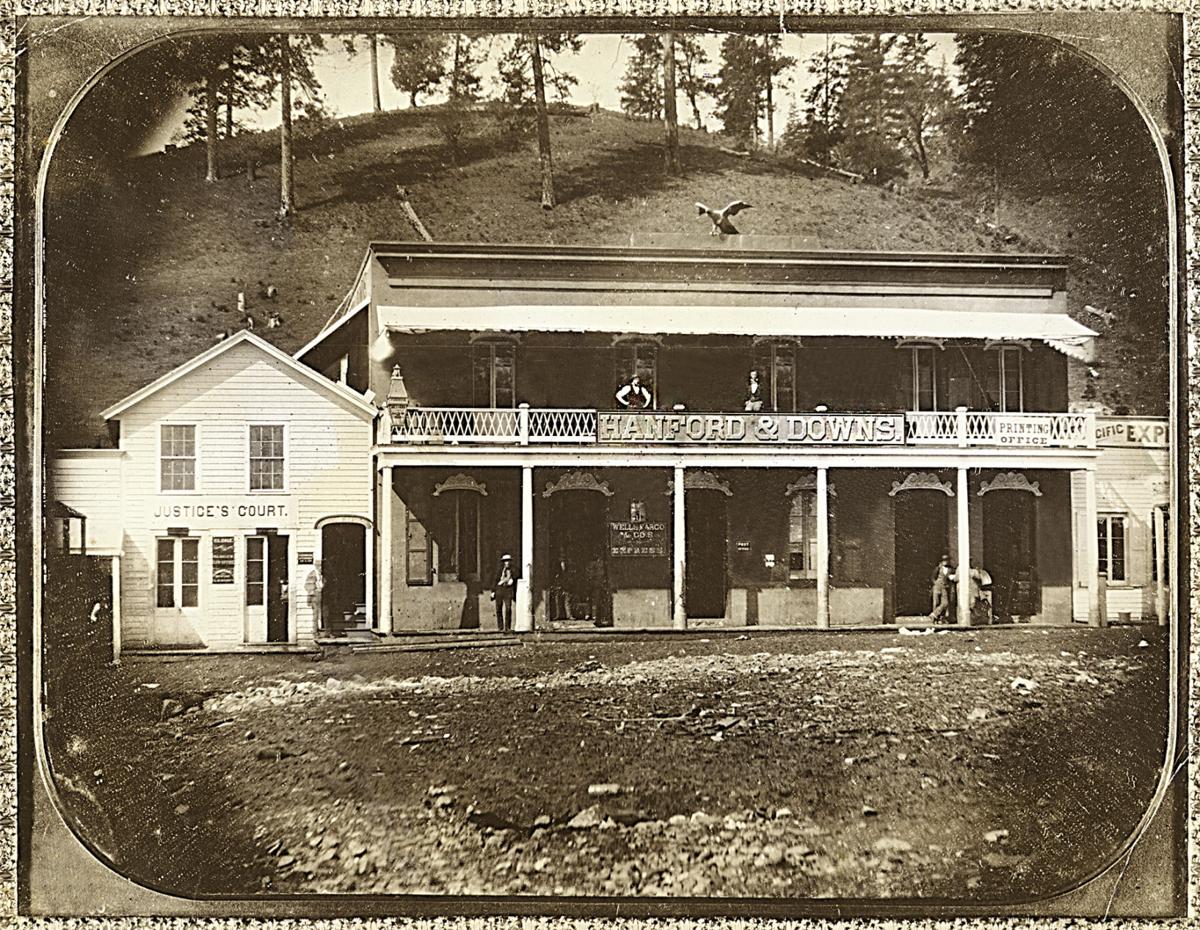 The Amador Ledger Dispatch is a direct descendant of the Volcano Weekly Ledger which made its debut in 1852. The offices were Hanford & Downs building in Volcano. 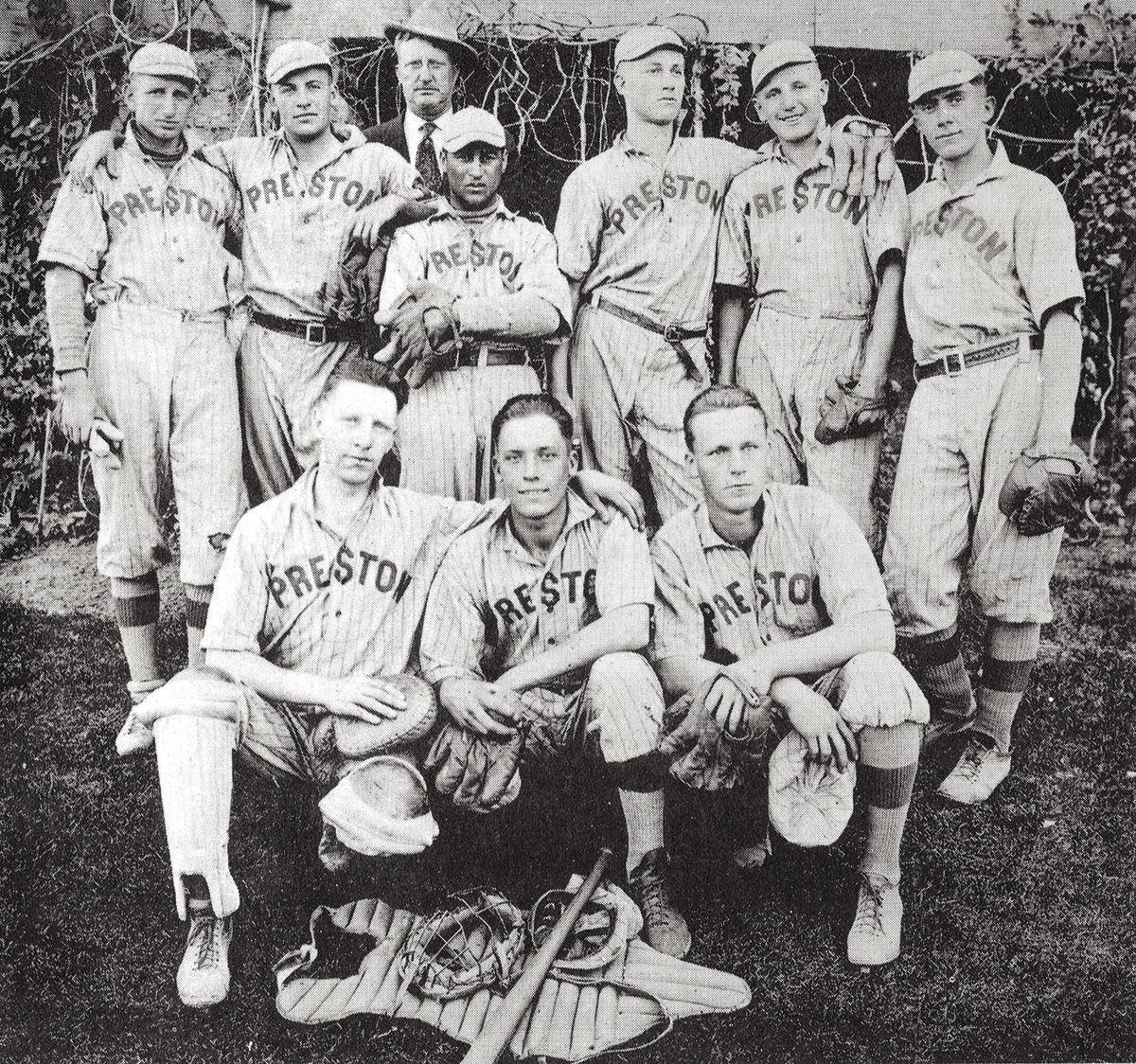 The Preston School of Industry’s baseball team had a winning streak in 1919. 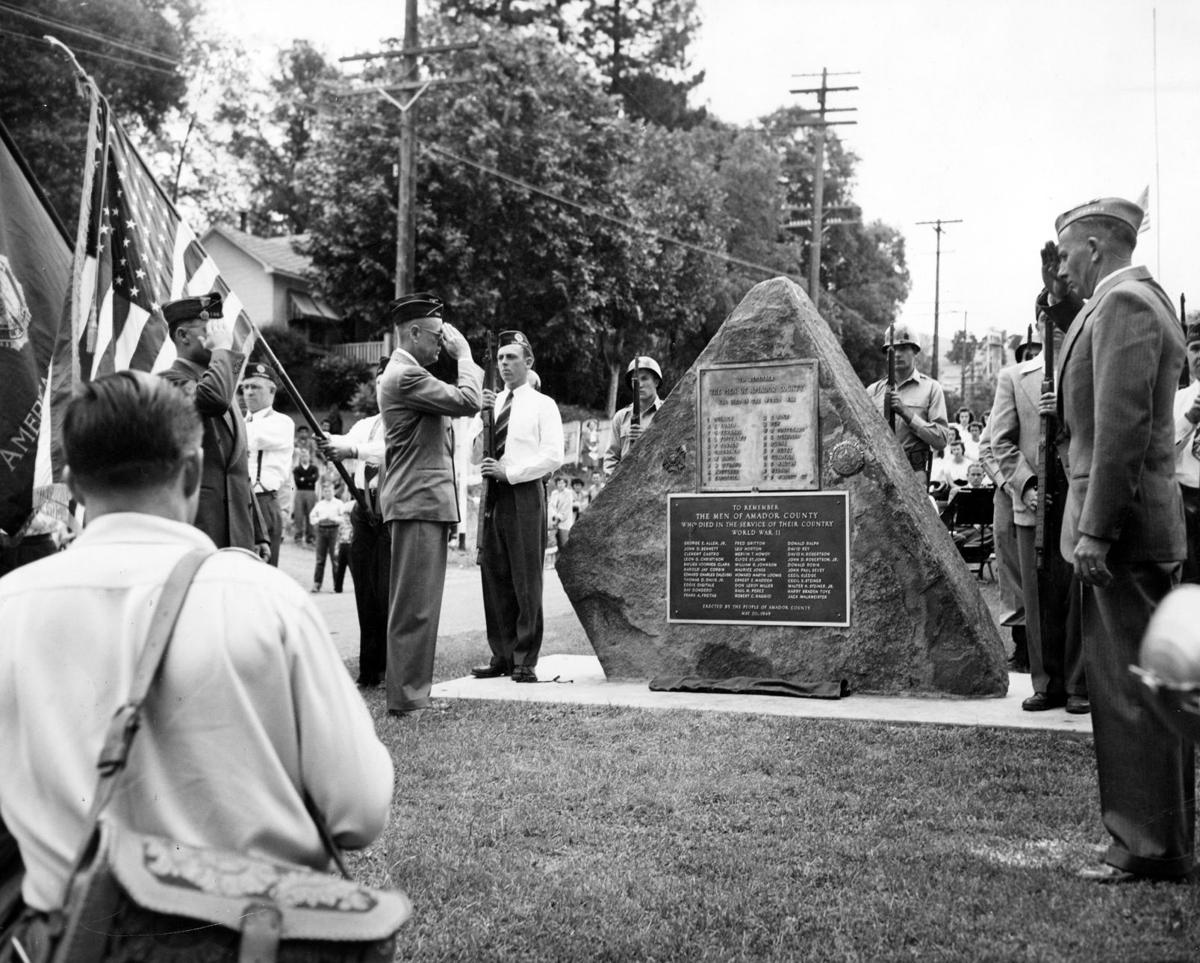 Veterans of Amador American Legion Post 108 gathered on Memorial Day 1949 to dedicate this memorial. Standing at right, saluting, is World War I veteran Ralph McGee who was elected as the first Vice-Chairman of the Post when it was organized in October 1919. 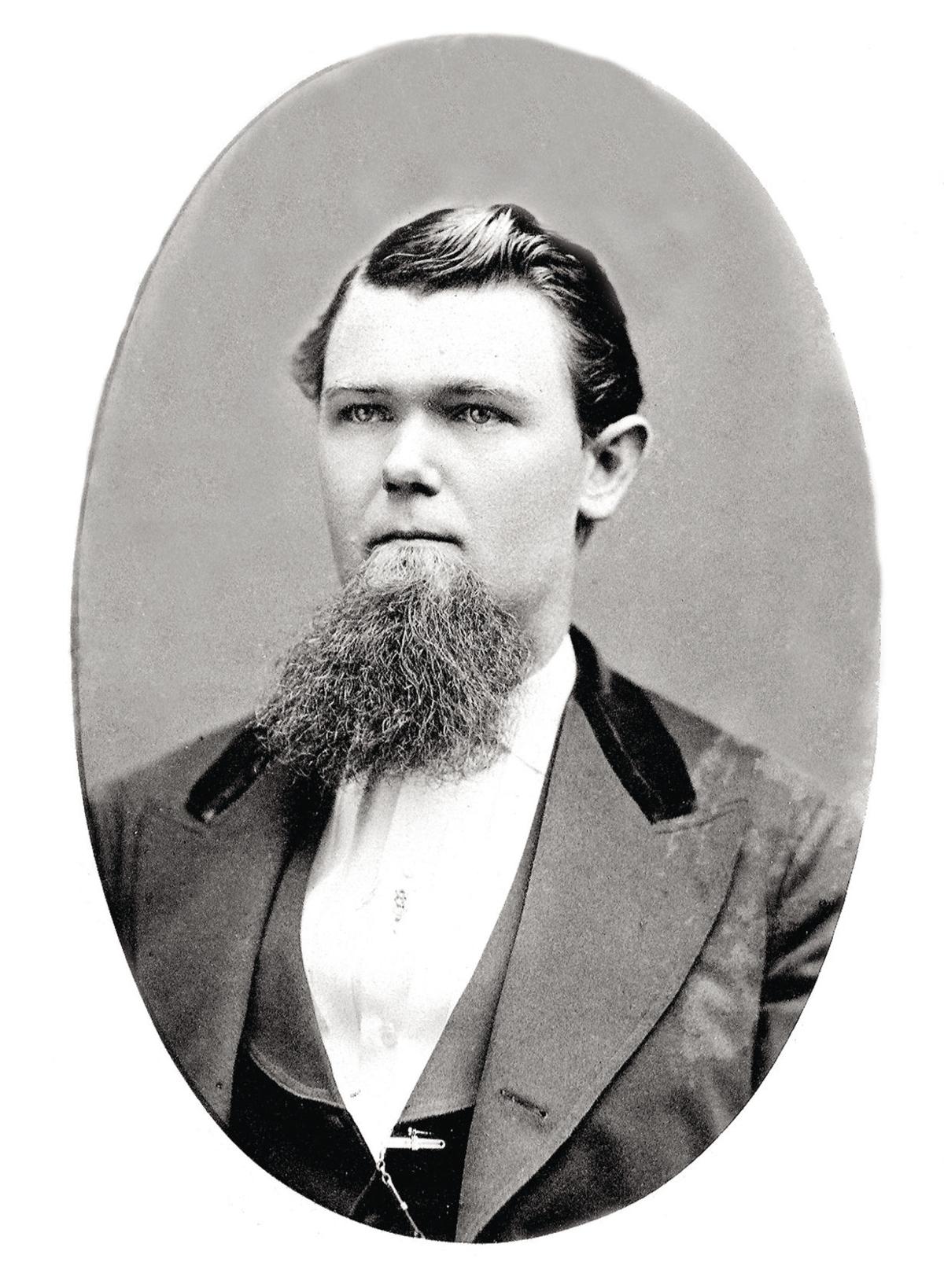 The opinion of early Amador newspaper publisher, William Penry, on the importance of the local newspaper holds true today – “Every community needs a free and open press.  Without it the news is just gossip.”

If you are in the majority, you receive your news from the television or your electronic device. If you are in the minority, you receive your news via a printed newspaper, newsletter, news magazine, or the radio. At least that is what the latest statistics on the subject tell us. We all receive news from our friends, family, and colleagues, but that can often be skewed. In fact, much of the news bombarding us every day, must be questioned as much as we question gossip. I began writing Vestiges of Amador for the Acorn News two years ago. The first column, Hold the Presses! - The Evolution of Amador’s Newspapers, was published on November 4, 2016. I thought it appropriate at that time, to write about the history of the county’s newspapers since the old Ledger Dispatch was purchased by the Jackson Rancheria and it would be informative to readers to understand that when the ownership of a newspaper changes it does not necessarily mean that the quality of the paper will be diminished, but rather is often improved.

Many of Amador’s newspapers did not survive due to the lack of readership. Especially, when those that have been big in the county since its earliest days, the Ledger and the Dispatch had faithful followings. That’s because they had the reputation of reporting honest news, albeit sometimes politically opinionated, especially during the Civil War and shortly thereafter, and they printed a community oriented newspaper. However, even the parents of this publication, the original Ledger and Dispatch were not without their trials. Fluctuations in Amador’s economy and population often through these publications into survival mode, as can be witnessed by the number of pages they printed at various times over their history. Their reputation of reporting honest news and being community oriented has carried on to this publication but today they face a different challenge, the economic survival of the printed page. Regular readers will know that the Ledger Dispatch recently changed to a weekly newspaper, publishing only on Fridays. Last month I was informed that they would also be cutting staff, stringers, and columnists and adding an online subscription fee to improve their bottom line. That cut includes the end to Vestiges of Amador. Just as I began writing this column about Amador’s newspapers, and knowing that the column was coming to an end, last week I thought it appropriate to end it with headlines from Amador’s old newspapers. So, with a fond adieu to my readers, I’ll end this run of Vestiges by picking up where we left off last week and take a look at what was in the news 100 years go from July to December 1919.

On July 3, 1919, reader’s of the Amador Record were getting ready to celebrate the 4th of July but not everyone was in a festive mood. Alongside the front page announcements of upcoming parades and parties, featuring the Jackson Band at the county seat celebration, was a headline reading “Samuel Fitzgerald of Volcano in Spirit of Fun Pulls Trigger with Fatal Result.” As Fitzgerald told authorities, he was shooting birds from his front porch when the accident took place. He had shot two but missed the third. His wife began bantering him about his marksmanship, saying he couldn’t hit her. Thinking the gun was empty, he playfully pointed it towards her and pulled the trigger. His assumption that the rifle was empty was wrong. His wife was shot in the chest and died almost instantly. The Amador Record told readers that tragedy during bird hunting followed the family. The woman’s brother, James Austis Cain, was shot and killed accidently while hunting quail in 1918.

Patrons of Amador barbers were pleased to find an announcement on the front page of the August 8th issue of the Amador Dispatch that the barbers union had met and decided not to raise the cost of haircuts above $.50. Likewise, Ionians were pleased to learn on that same front page that Edward Carl Bank had been reelected to the position of Superintendent of the Preston School of Industry upon the resignation of John L. Montgomery. Bank had previously served in that position from November 1893 until May 1897 and was credited for making the institution an outstanding place for the rehabilitation of young offenders. While the Superintendent was being replaced, the school’s baseball team played a winning streak throughout the summer but that streak was not enough to get them the pennant. The honor of winning the title of Northern California Champions of 1919 went to the Plymouth Baseball Club. Details of their winning game against the Mare Island Machinists on August 30th garnered the first column headline in the September 5th issue of the Dispatch. The nail-biting game was won when Plymouth Consolidated mill man William “Billie” Krutosik drove a triple into deep center. The ending score to the thrilling game was Plymouth – 5 to Mare Island – 4.

As summer transitioned into fall, Amador newspapers reported that residents in the high Sierra were snowbound at Silver Lake and Blue Lakes while in the low country Colonel John L. Flynn of the Internal Revenue Service paid a visit to Amador County as grape harvest ended. The front page of the October 3rd Dispatch carried the headline “Newly Made Wine Subject to Seizure.” Prohibition was passed in January 1919 and Flynn was forewarning Amador grape growers that if they bottled any wine, other than for personal consumption, law enforcement would be there in January to enforce the Volstead Act. The ultimatum was pretty much ignored by the Amador Grape Growers Association who passed their own resolution stating they intended to bottle wine but would not sell it to others.

With Halloween just around the corner, a smallpox epidemic hit Jackson. When the illness made the headlines in both the Dispatch and the Record there were already 17 people under quarantine in the town. The lengthy articles explained how the disease spread and encouraged residents who were anti-vaxxers to see their doctor immediately. Another leading headline in the Dispatch of that date reported on the gathering of nearly 100 honorably discharged servicemen on October 19th with the goal of establishing a post of the American Legion in Amador County. Dr. Edward E. Endicott was elected chairman of the Post and Ralph McGee as Vice-Chairman. The charter members vowed to organize a drive to solicit membership to the many veterans in Amador County.

The headline style of the Dispatch and the Amador Record and Ledger were very different in 1919. The front page of the Dispatch tended towards feature articles while the Record and Ledger printed local social gossip briefs and news of the courts and Board of Supervisors meetings. The tidbits printed by the latter were just as important to readers as was the major news featured by the former. As an example, the November 13th, issue of the Record and Ledger nearly filled the third column on the front page with a story about the 18th wedding anniversary celebration of Martin E. Tucker and his wife Birdie. The Dispatch on the other hand, in their November 14th issue, used the same column to print a story about a man named Hartman from Southern California, “posing as a grape and fruit buyer” passing bad checks in Amador and Calaveras counties. He would purchase the produce and after it was shipped, he would be billed and then send a check. Three growers in Amador County, including the Prevatali ranch near Clinton, fell victim to the culprit.

As 1919 came to a close, the front page of the newspapers in Amador carried their usual fare with Christmas pieces here and there. The Dispatch included an illustration of a holiday wreath wishing everyone a Merry Christmas. One December issue of the Dispatch printed a notice that local women were gathering Christmas gift items for the less fortunate and asked their readers to write to the paper if they knew of any families that were in need. That same front page warned mining claim owners that when preparing their annual “Notice of Intention” they also needed to file proof of labor or improvement. In the column next to it, the paper reported that the Ione Fire Brick Company had a record year in 1919, producing over 3 million bricks in the five kilns at the facility. The following week, it was back to business as usual for the newspapers with recounting holiday festivities and articles on things upcoming in the new year; however, both newspapers had quite a few personal items on the front page of their last issue for 1919. Probably because traditionally the holidays are all about family and community.

As 2019 comes to a close, and we find ourselves in the midst of holiday celebrations just as Amadorians did 100 years ago, let us remember that the season is about family and community. That community includes this newspaper. For without you it would not exist. There would be no headlines. As William Penry, one of Amador’s first newspaper publishers, once said “Every community needs a free and open press. Without it the news is just gossip.” A local newspaper is a tradition in Amador County that needs your support. As my time as a contributor to the Ledger Dispatch comes to an end, I would like to thank Jack Mitchell and the newspaper staff for their support of my lifelong passion of sharing history with others. I would also like to thank readers who have reached out to me over these last two years to tell me how much they enjoy reading Vestiges. Their compliments are an inspiration to my work. And last but not least, my family for understanding why my office door was often closed when I had to meet a deadline for submission. I will miss sitting down at my desk every week to write these columns but the conclusion of this series in no way ends my research and writing on the history of Amador County. Look for some new things in print from this historian in the future.