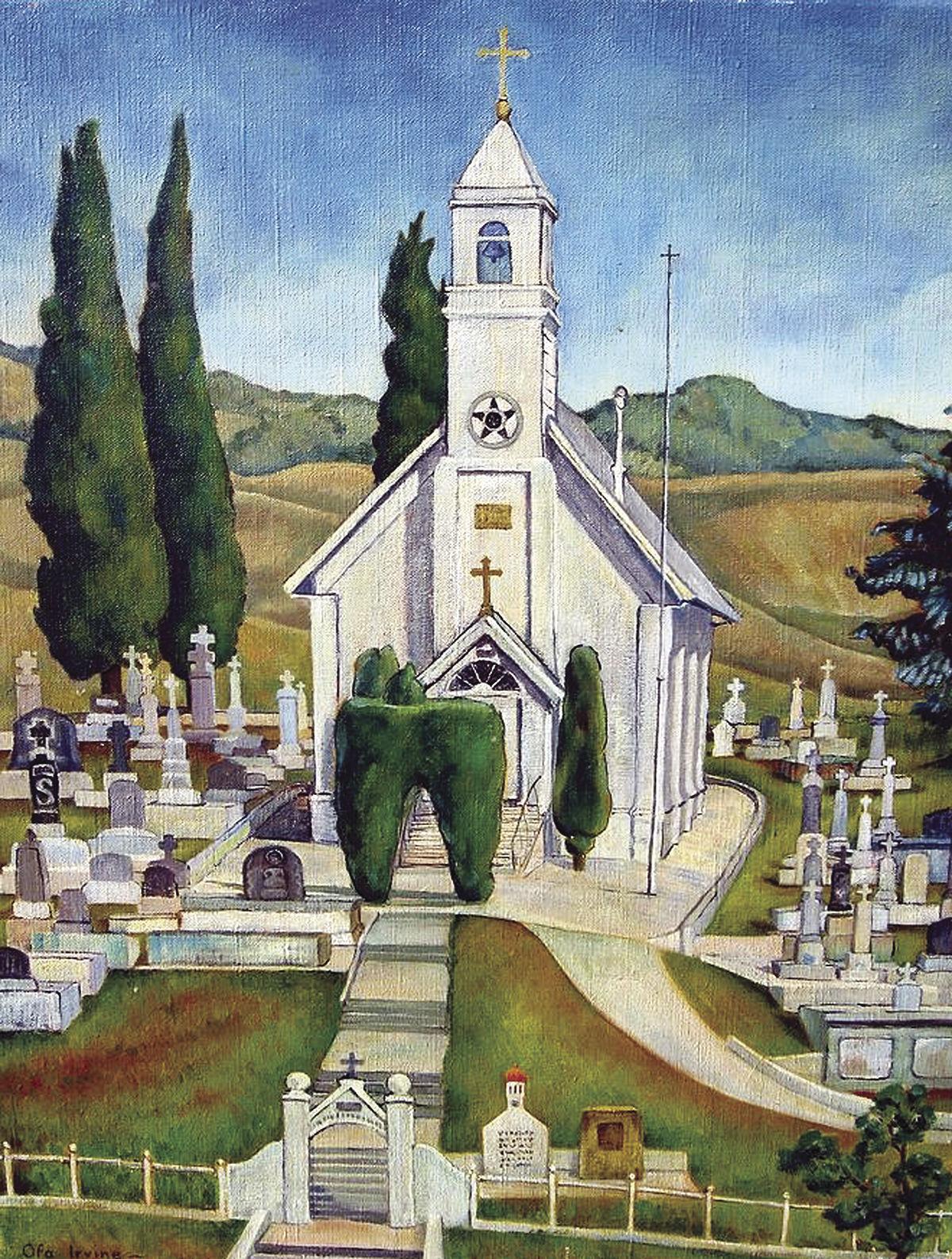 The picturesque and quaint setting of St. Sava has long been the subject of photographers and artists. This painting was composed by Vivian Chepurkoff Hayes, the daughter of Russian born San Francisco artists Michael Gabriel Chepourkoff and Ofa Hayes Irvine Jallu. 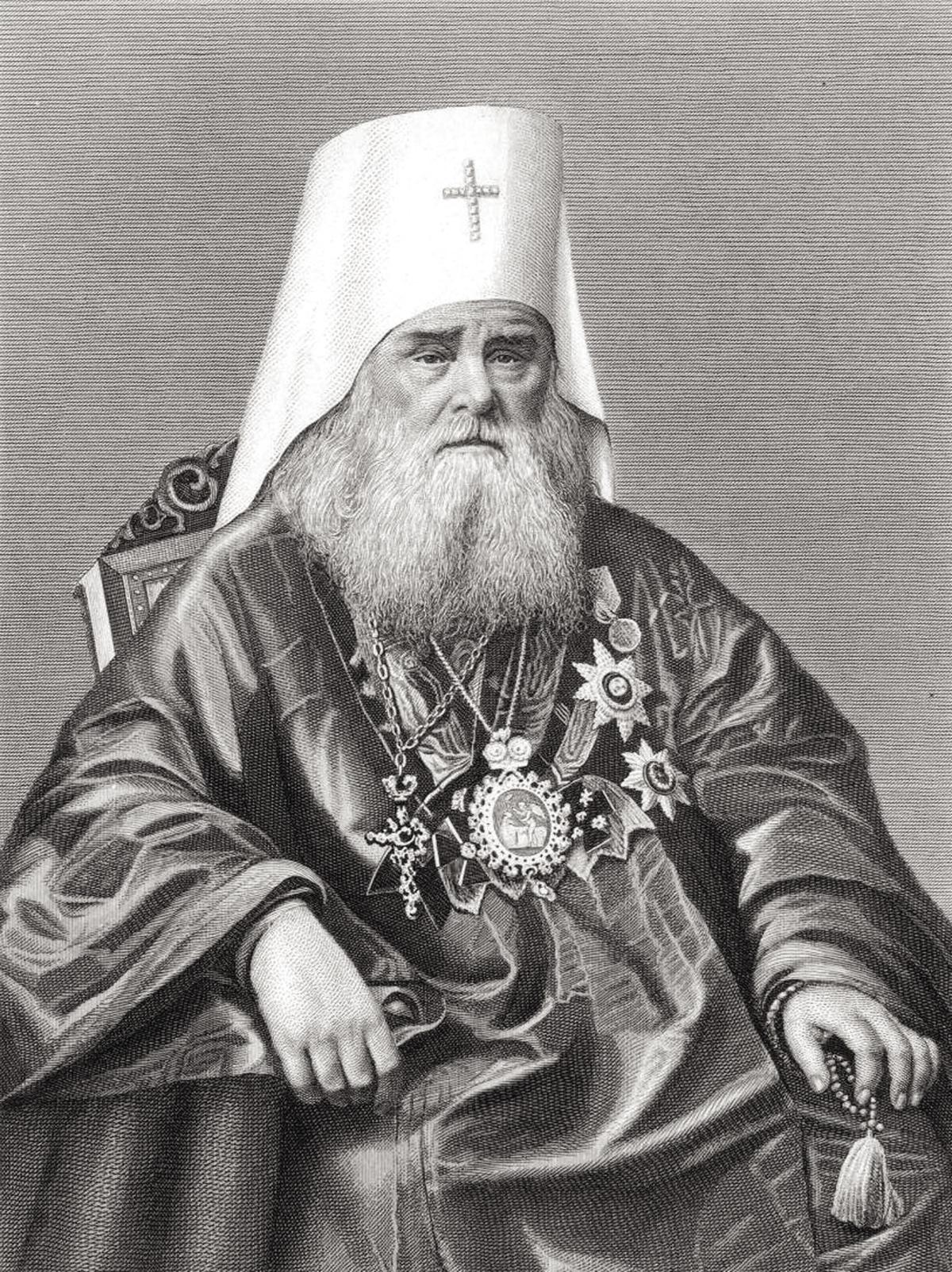 This history of the Eastern Orthodox Church in North America is inextricably linked to the history of the Russian maritime fur trade which began in the mid-18th century and prospered for over 100 years, well into the later decades of the 19th century. Although British and American trapping companies entered the scene during the 1780s, the Russian-American Company controlled the trade along the Alaskan coast for nearly the entire era. It was during the earliest Russian forays into the Gulf of Alaska that Eastern Orthodoxy first made its appearance. It occurred in 1741 during the second voyage of Vitus Jonassen Bering to the region when the Divine Liturgy was celebrated on board ship after the crew spotted the coast. Over the next five decades the Russian fur trade took hold and settlements were established along the coast – Fort St. Michael aka Redoubt St. Archangel Michael in 1779, Three Saints Bay in 1784, Kodiak in 1791, Slavorossiya in 1795, Nulato in 1838, Fort Stikine in 1840, Ikogmiut in 1842, and many other trading posts. With Russian settlement came the Eastern Orthodox Church. In 1794, a group of ten clerics from the church were sent to Kodiak Island by Catherine the Great where they established a mission. The priest’s attempts to Christianize the natives was often met with violence, a lack of necessities, and the bitter cold and deep snows of the region. Despite the hardships, they persevered until 1799 when their Bishop Joasaph, along with two other clerics, drowned at sea.

Eastern Orthodoxy suffered a setback at Kodiak after the loss of the Bishop and his companions. At Unalaska, a monk Macarius had been preaching to the Aleut population since 1795. He was one of the ten clerics sent to Alaska under the direction of Joasaph Bolotov. By 1808, when he built the first Orthodox religious building in Alaska, he had baptized most of the natives in the region. In 1823, the Holy Synod made the decision to send a new priest to Alaska. A priest, who would be become the Metropolitan of Moscow, and eventually elevated to sainthood as ‘The Enlightener of the Aleuts and Apostle to the Americas,’ volunteered for the mission. He was born in 1797 in the village of Anginskoye, Irkutsk Province, Russia. Ivan Eveseyevich Popov was the son of church server who died when the boy was but six and he was sent to live with his uncle, the parish deacon. When he reached 10 years of age, Ivan entered the Irkutsk Seminary where he was given the name of Veniaminov by the rector. Shortly after his marriage in 1817, he was ordained a deacon and in 1818, he became a teacher in a parish school. Three years later he was ordained a priest and became known as Father Ioann. In May 1823, he left Russia for Alaska with his wife. They arrived at their new home at Unalaska in the summer of 1824. The family moved into a modest earthen dwelling. Veniaminov trained the natives on Russian construction skills and, with their assistance, within a year built another chapel not far from that built by Macarius. The wooden church built by Veniaminov stood until 1858 when it was replaced with a new chapel that incorporated some of the timbers from the old building. This was again replaced in 1894 with the church that still stands at Unalaska.

Fort St. Michael, also known as Redoubt St. Archangel Michael, near the present day Sitka was the next site on which an Orthodox Church would be built. The area was first explored in 1741 but it wasn’t until 1779 that Alexander Baranov, as an agent for the Russian-American Company, entered into an agreement with the Native Tlingit for land on which a Russian fort was established. Another two decades would pass before the company actually established themselves there in 1799. They erected a number of log buildings and surrounded them with a wooden palisade. Relations with the Tlingit were unfriendly and the natives staged several attacks during the winter of 1799. However, the Russian traders continued their work with success. In 1800, a number of the inhabitants of the fort returned to Kodiak leaving 29 Russian, 3 Brits, 200 Aleutian natives and a few Kodiak women in residence. The Hudson Bay Company, wanting to gain a foothold on the fur trade in the region, met with Tlingit natives in 1801 trading them muskets and gunpowder for exclusive right to fur trading in the region. In 1802 the Tlingit attacked the Russian enclave, retrieved some pelts that were onsite, and burned the settlement to the ground, including a partially built ship. With the exception of fur hunters and a few natives away at the time, all inhabitants of the fort were killed. The survivors and what pelts that were not taken from the fort were taken on board the British ship Unicorn to Kodiak. The captain of the ship extracted a ransom of 10,000 rubles from Kodiak overseer Alexander Baranov to free the prisoners and the pelts. Two years later, the Russians returned to the Fort St. Michael area, this time in force, and established Novo-Arkhangelsk or New Archangel, the new headquarters for the Russian-American Company. They built a new fort atop what has come to be known as Castle Hill and armed it with 32 cannons. Inside the palisade were eight structures. The strategically built defensible spot deterred the Indians from attacking. They moved away from the settlement allowing it to expand. In 1808, the capital of Russian America was moved from Kodiak to Novo-Arkhangelsk and Baranov renamed the settlement Sitka. It took nearly a decade for the church to find a presence in Novo-Arkhangelsk. After the death of Bishop Joasaph of Kodiak in 1799, only three Orthodox monks remained in Alaska at Kodiak. Baranov’s treatment of the native population had left him at odds with the clergy. In 1800, Baranov placed the remaining monks under house arrest, and forbade them to have any further contact with the local population. However, despite this chasm, and a lack of church leadership, in 1816 an Orthodox church was erected at Novo-Arkhangelsk and Fr. Aleksei Sokolov was sent from Russia to serve as its priest. Here, he baptized and performed church ceremonies for settlers and natives alike. Although his mission continued to grow, the Holy Synod closed the episcopal see in Alaska in 1811. The church would remain in somewhat of a vacuum for the next dozen years.

In 1839, Father Ioann traveled home to Russia where he was promoted to archpriest on Christmas Day at St. Petersburg. Meanwhile, his wife took a trip to their hometown of Irkutsk where she died unexpectedly. Upon hearing of her death, Ioann requested to travel to Irkutsk but the church urged him to take the vows of a monk, an act he did not agree with. He held out until the following year and was tonsured a monk in November 1840. Ioann was given the name ‘Innocent’ and then elevated to the position of Archimandrite. The following month he was consecrated as Bishop of Kamchatka in Alaska, the Kuril Islands in Russia, and the Aleutian Islands in Russian America. He returned to Alaska, settling at Novo-Arkhangelsk the following year. Here, again with the assistance of the native population, he built another chapel.

Over the next decade, Bishop Innocent ministered to his flock, spending a good deal of time traveling by boat to the neighboring Unalaska and the Fox and Pribilof Islands. During these travels his scholarly pursuits were directed towards bringing together native language and culture with Orthodox traditions. He learned a total of six dialects within a short time on which he would later publish a number of works. In 1850, he was elevated to an Archbishop and three years later moved his residence to Yakutsk. In 1865, he became a member of the Holy Synod and two years later was appointed the Metropolitan of Moscow. His work there took in revising church texts and raising funds to alleviate the poverty in which many Orthodox priests were living at the time. He also established a home where retired priests could live out their elderly years. For his work among the Native Alaskans and his devotion to learning their languages and culture, the Orthodox Church in America declared him a saint in 1977.

St. Innocent’s expansion of the Orthodox Church in Alaska created a lasting foundation for Russian and Orthodox tradition among the native population there. However, with the purchase of Alaska by the United States in 1867, many Russians who had made their livelihood from the fur trade, returned to their native country. This would not be their only influence on the west coast of North America. They had long had their sights on gaining a foothold to the south. In 1803, bureaucrat Count Nikolai Rezanov, set sail from Russia headed for Nuevo California. The voyage would take him three years with stops in Japan, the far east of Russia, and Russian settlements in Alaska before landing port in San Francisco.

In 1863, San Francisco was a bustling city boasting an international citizenry who hailed from a multitude of countries around the globe. With…