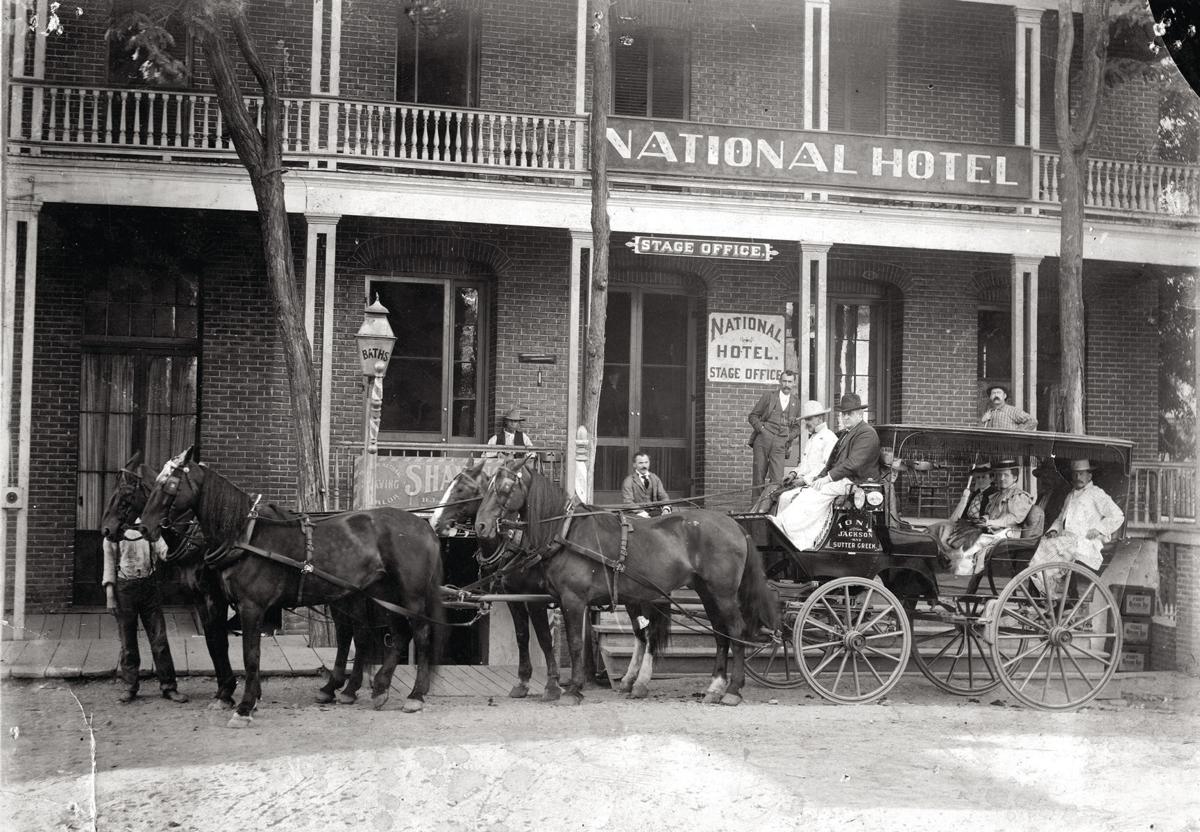 According to John Pierovich, kids would wait for the stage and start whoopin’ and hollerin’ following visitors and riders of the stage all the way to the National Hotel. 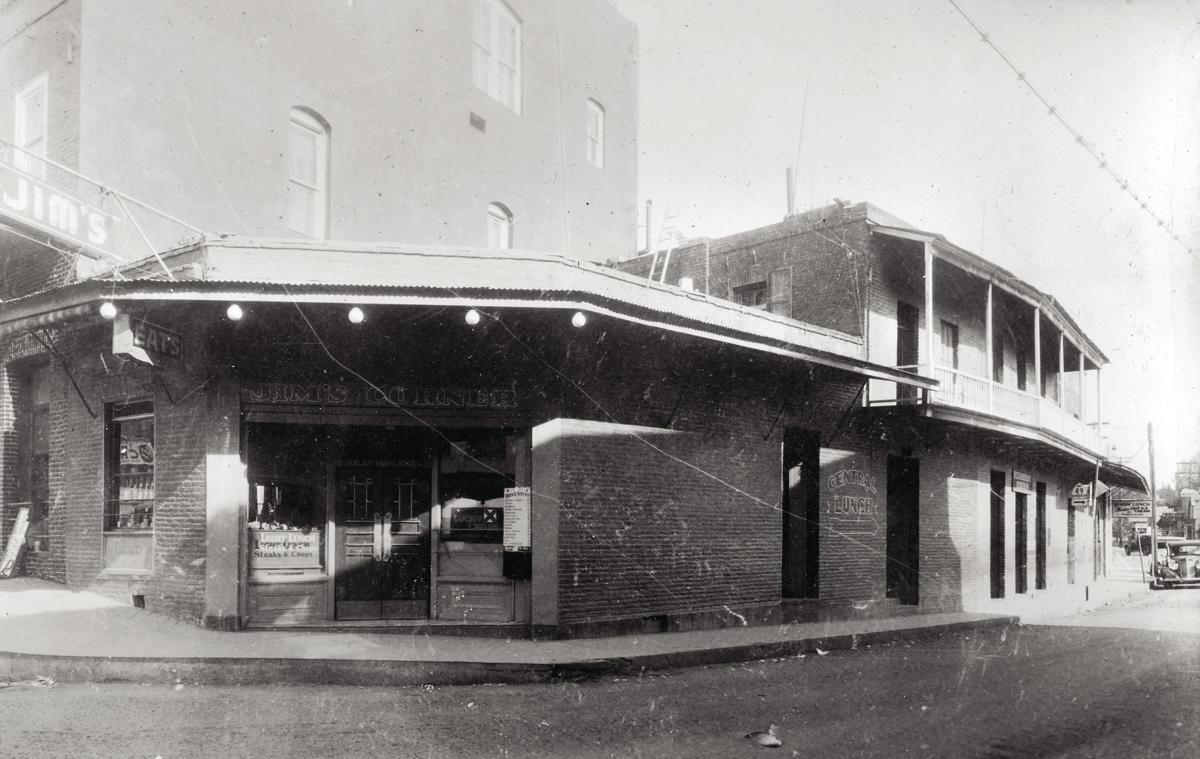 Enrico and Alphonse Ginocchio ran the Ginocchio Brother’s Grocery on the corner of Main and Water Street in Jackson for many years. This photo of the Ginocchio Store building was taken in the 1930s when it was home to Jim’s Corner.

One day I was talking with-rather, I was listening to-John Pierovich, and after a couple of minutes I just turned him loose, sat back and let him go.

He wove together memories of Jews and Indians, Italians and Chinese, cornucopias, candy stores and bordellos, and he didn’t stop to take a breath.

This is what he told me:

‘I’ll never forget goin’ to Angels Camp back in the horse and buggy days. Had an Aunt that lived there, and every year it was a trip, a big one, and I went with my Dad, and I remember my old man driving that horse. We’d rent a horse and buggy from old man Podesta. He had a stable where the Bank of America was. It was 30 miles, and that was a long trip, and it would take all day to get over there.

‘And I can remember the stage that used to leave Jackson in the mornin’. Chris Meiss, Howard Meiss’ father, was the driver, and they had a shotgun guard-that was old man Fisher. He rode shotgun from here to lone, and I can remember my Mother taking me to San Jose one time, and I can also remember riding that stage from lone back to Jackson. There was a half-way station down where the trestle goes over the road. There was a place there where you’d stop and get a drink of water and go to the bathroom if you had to.

‘And every night us kids used to wait in Jackson for that stage to come in. We’d wait across from where Mel’s Drive In is now, and we’d follow that stage a whoopin’ and a hollerin’ all the way to the National Hotel. It was a great deal! And then they’d put up the horses at old man Newman’s stable that was just by Jackson Creek. I’ll never forget old man Newman even if I drop dead! He had a big, long beard, and I think he owned the horses and the teams, and the stages too, ‘cause they were all so beautiful. One of those coaches used to be parked out in back of the Bank of America — where it is now, that is. Yeah, there was a stage parked there, and it was on leather swings. And us kids used to get in there when no one was around, and we’d just swing on that thing like to bust it!

‘And the first car I ever took a ride in was a Stanley Steamer-you know, that thing was wood powered to get the steam going and it took a while, and they charged 35 cents to ride in it, and it was parked in front of the National Hotel. We went up Water Street and around by the Cemetery and then come down North Main Street and back to the National Hotel. Fellow name of Nunley owned the thing-made a hell of a racket-thought it would blow up on us, but it sure was fun.

‘And boy, did us kids have fun with them old-­timers! They’d come over to this country and none of them could read or write. You take my Dad — he got on a ship when he was 12 years old and sailed the seven seas. He told me about South America and everything. I was pretty young to understand much, but I think he finally landed in San Francisco and then come up here to the Gold Country.

‘And there was this hairdresser in town, she had some kind of hat shop. Her name was Miss Prosser, I think. In them days women wore a bustle-it was a little pad, a kinda moon-shaped thing. And this Miss Prosser, she always wore a big bustle, and our boarders would just sit on the front porch when she come by, and one guy said, ‘I betcha’ that’s false.’ Then another guy didn’t think so, and they made a bet. ‘How you gonna prove it?’ another guy said. They had no answer to that one.

‘And in the Wells Fargo Restaurant was the Ginocchio Brother’s Grocery. It was a dry goods store, and just around the corner was the grocery store part. There was a Mrs. Vela in there, she was a sister to the Ginochios, and there was another sister name of Etta Eudey. They had a delivery wagon too, and they were real prominent people here in Jackson.

‘And let me tell you about the red light district, it was really something. There were five or six houses there, maybe more. That’s where the Bank of America is now. Us kids used to sit on the hill and toss rocks down on the roof tops. It was lots of fun.

I remember working for George Thomas, the butcher. I used to drive a little cart with a horse and deliver meat around Jackson. Mr. Thomas had a shop across from the Bank of America and the barn was next to Davies Garage on Water Street, and we took care of the horses there. I fed the horses too, and I think I got a dollar a day. And in the afternoon I had to go out and help in the slaughter house out on New York Ranch Road. After we put the horses up for the night, we’d go get an eyeful of the red light district. All the old madams would come out, and I can remember them sprinklin’ the dust down.

‘And there was an old gas works there. Fella name of LaTang ran it. I used to steal all my old mans potato sacks and then go down and sell them to Mr. LaTang for a nickel each. He’d load them with coal, ya know.

‘Money was hard to come by in them days. I used to make some money this way-when the mail come in I’d check, and if a boarder got a letter from the old country I’d make him give me a nickel before I gave him the letter.

‘Then we had to go to the slaughter house and help kill in the afternoons. We’d get on the horses, and old man Thomas never gave us a bridle, and we had to put a rope around the horse’s nose, and he wouldn’t stop until we got right to the door of the slaughter house! Those were sure the days.’

Right about then John’s wife Thelma came in and sat down. She continued their story and didn’t miss a beat.

Next time we’ll talk about candy stores and cornucopias and riding a mustang up Main Street.