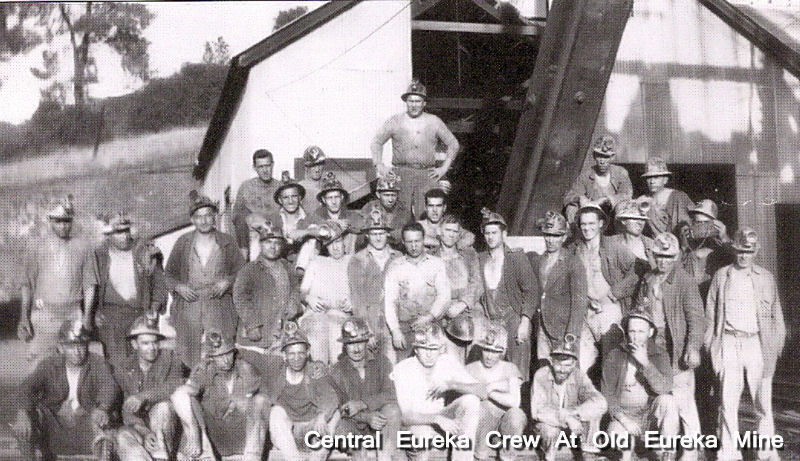 The Central Eureka work crew ready for their shift with hard hats and carbide lamps. Here gathered in front of the Old Eureka shaft. 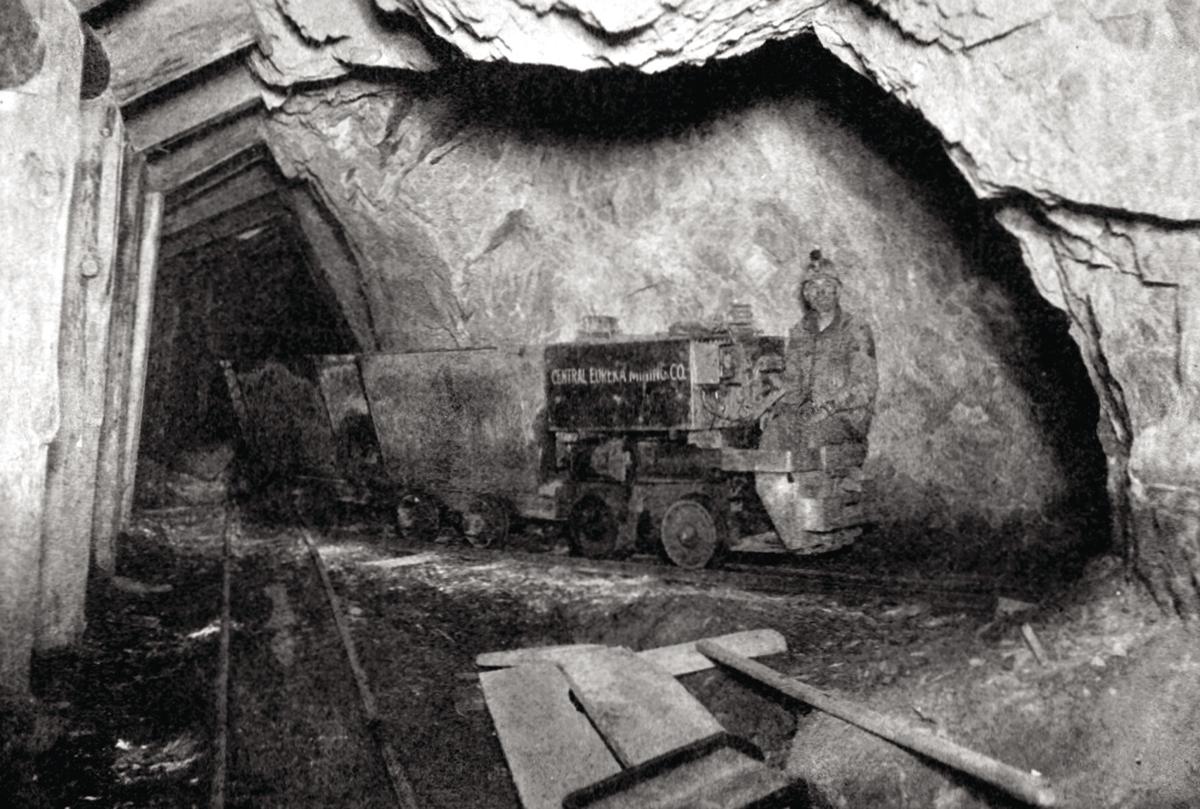 In this photograph, a miner works underground in the Old Eureka Mine in Sutter Creek. It was taken after the Old Eureka became part of the combined holdings of the Central Eureka Mining Company.

Hard rock mining was-and still is-a tough, incredibly dangerous business. Take the case of the Argonaut Mine in Jackson. The men sweated a mile underground, where the temperature was over 100 degrees, and where they pulled a 7 day work-week. If they were lucky, they got a day off at Christmas. And all the while their lungs were being chewed up by the quartz dust they were drilling and constantly breathing.

But a few small perks were mixed in with the nightmare of the situation. One of those perks was high-grading-and if you don’t know what high-grading is, the Random House Dictionary defines the word simply and accurately as ‘ ... to steal rich ore from a mine.’

It was considered a perk, because the mine bosses would let you get away with it if you weren’t too greedy. It was an easy decision for management-let the miner get away with a dollar or two of gold, and he won’t think as much about his lousy pay or unsafe conditions in the mines of Amador County,

But as time passed, and more and more miners made off with more and more high-­grade ore, the mines instituted a drastic change-this was in the form of what was called a ‘change room,’ and this is how a change room worked.

The miners would arrive at work wearing their town ‘duds’ and then head directly to Change Room #1. They were required to strip naked, hang their clothes in a locker, walk down a hall into Change Room #2 and put on their work clothes. Only then were they allowed to go down in the mine.

When the shift was over the process was reversed. First, topside and off with their work clothes-then, naked and down an inspection line where they were checked and examined for the possible theft of high-grade gold ore. Only then were they allowed to put on their clothes and go home.

Well, did this complex system cut down on the pilfering? Not at all, and here, in the sacred words of that Guru of Gold, Frank Liddicoat, we’ll prove it.

‘The first high-graders kept things pretty simple,’ Frank told Jan and me all those years ago. ‘They’d hide bags of gold ore somewhere in the mine and then wait for some emergency to occur. When it did, the high-grader would sneak the ore out during the confusion of the moment. Risky, but it usually worked.

‘And if there wasn’t a well organized change room at the mine, the men would just carry out the high-grade in sacks they’d hang around their necks. But the mine bosses got wise to those methods, and the high-graders were forced to become real sophisticated quickly!’

About then Frank stopped and lit a cigarette. He downed a shot of whisky, took another deep drag and continued. ‘I had a big old pocket watch,’ he said. ‘A real turnip, ‘bout the size of an alarm clock, as I recall. It was the only personal thing I was allowed to take into the mine. But I sure couldn’t tell time by it-hell, it always said a quarter to two because there was no works inside it. I’d pound up the high-grade and sneak it out in the watch case. They never did catch me!’

Then another puff on his cigarette and another story as Frank continued. ‘An old miner friend of mine made this little chamois leather bag-about the size of a silver dollar. He got some catgut about two feet long, tied one end to the chamois bag, and his old lady tied the other end to his back tooth. Then, when he was underground, he’d fill the bag with high-grade, swallow it, and after he got home he’d just pull it up out of his stomach-worked until they got wise and started checking in his mouth. But he sure fooled ‘em anyway!’

‘What’d he do?’ I asked Frank. ‘He pulled a Houdini on ‘em’, Frank replied. ‘He did what magicians did to hide keys-he read it in a book somewhere. He got rid of the catgut and just swallowed the bag of high-grade with nothin’ tied on to it. Then when he got home, he’d stick his finger down his throat and throw it up. Worked every time!’

About now, Frank got up from the table, stretched, grabbed a pencil and paper, sat down again and started scribbling. ‘Look, the mine owners, they got 22 bucks an ounce for the gold,’ he told me, ‘but the miners, if they bootlegged it, got only about 10 bucks an ounce. They’d even process the gold right in the kitchen with their wives helping-boil that mercury right on the stove and separate the gold from the ore right there on the kitchen table. They’d breathe all those mercury fumes, but I guess they didn’t know better back then.’

‘Anyway, those poor guys were milling the ore it and making a finished product out of it­ — and they were doing it cheaper than the mine could. And ya’ know what happened? The mine owners bought the gold back from those jerks! Those high-graders were processing it and doing it cheaper than the mine could, so the mine guys bought it back for 15 dollars an ounce and then sold it for 22 bucks an ounce. They were makin’ money on gold they didn’t even have to touch. What a racket — that’s why the mines weren’t so rough on the high-graders in the early days.’

Then, without so much as a pause to catch his breath, Frank went on, ‘Knew this Spanish guy; he lived up on the ridge behind the Central Eureka, and he had a horse and buggy. Well, the miners would mill their high-grade up at his place, because it was easier than at home, and they’d sell it to him, because he paid a buck more an ounce than the mine. Well, this Spaniard had a big family-a wife and a hell of a lot of kids, but he was a real nice guy. Never put on airs or things like that. He just looked like any dumb mucker, or some poor fella with a bunch of kids, like I said. Anyway, every week, like clockwork, he’d load his buggy with all this high-grade and head down to Frisco. He sold it to the Mint and made a fortune.’

And with that Frank tossed his pencil and paper on the kitchen table. ‘Let’s have a drink!’ he said.