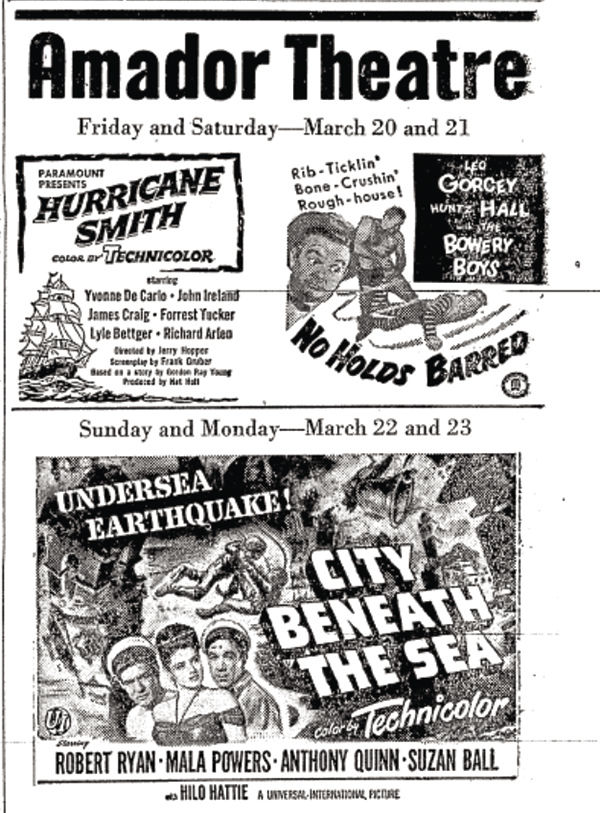 Jackson had the only movie theater in the county. In the early 50s, a quarter got you in the door, plus an orange soda and popcorn. 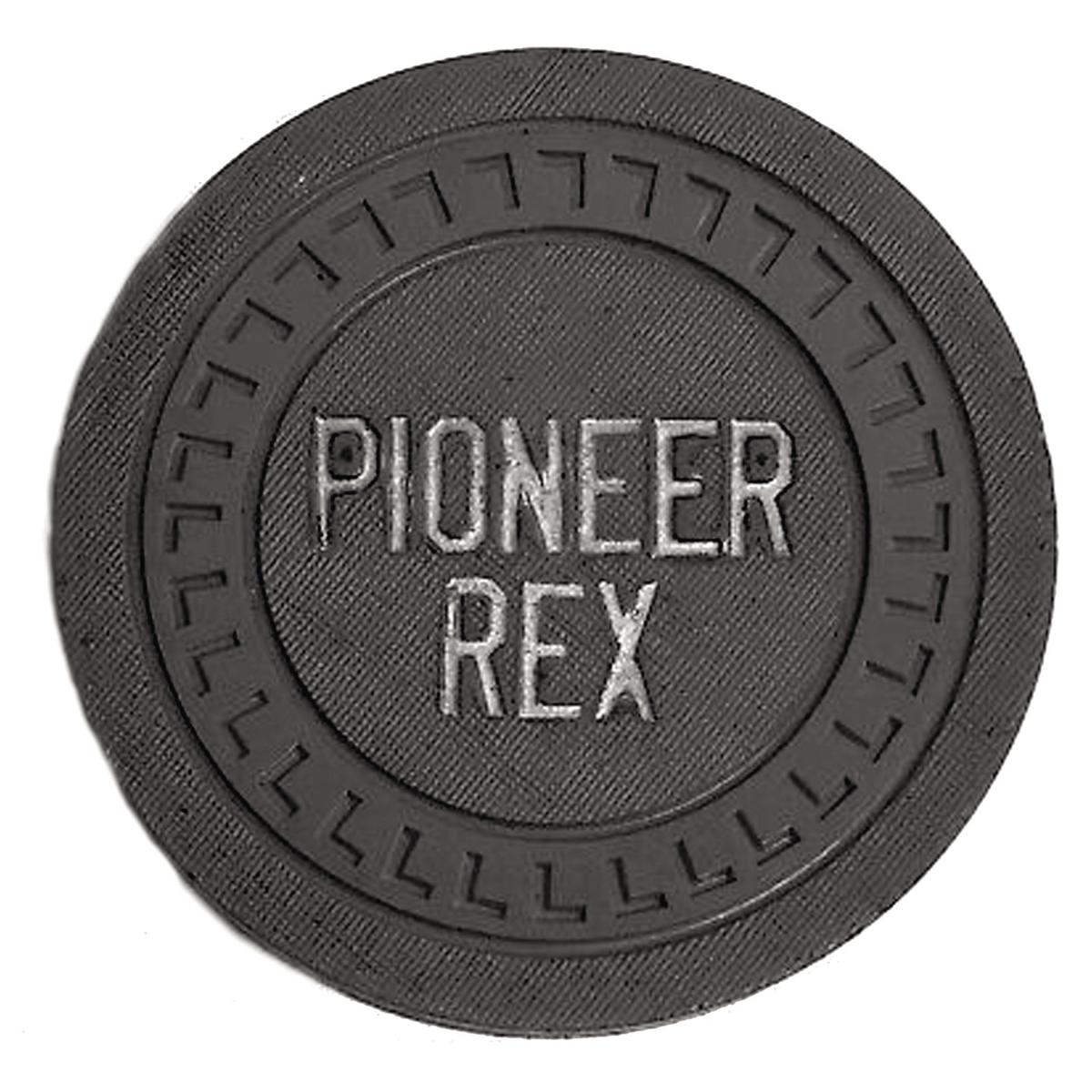 The Wells Fargo and the Pioneer Rex were two of the more popular downtown bars.

Delivering newspapers, beginning at age 8 in 1951 in downtown Jackson and later that decade working for Raggios market, also in downtown, allowed me to know many business people. Jackson was called “the last wide-open town in California” because of the illegal prostitution and gambling that went on long after Governor Brown decided to end it state-wide. And this was probably due to the 16-plus bars in downtown Jackson that flourished at the time.

Many men of that era are referred to as the Greatest Generation, but the women of that time period also deserved that reputation. Women served in both wars. They also lost loved ones in World War I, survived the Great Depression, raised families by themselves during World War II, and held jobs, all while carrying the anxiety of wondering if they would receive the dreaded letter from the war department notifying them of a relative’s death.

Very few of us would want those days back, as life has become so much easier. Imagine living without televisions, computers, cell phones, air conditioning, microwave ovens, modern medical care, seat belts, and so on. Back then, a family ride to Sacramento usually ended up with someone getting car sick from the exhaust fumes seeping into the interior. Drinking water was forbidden during high school football practice no matter how hot it was or how long the practice lasted. Instead, you were given salt pills to avoid dehydration. Cigarette smoking was everywhere, and a night out left your clothes smelling of stale smoke. As a small boy, before air conditioning, my parents would spend hot summer evenings on the front porch playing canasta with Frank Bouza, Bill Trudgen and John Vinciguerra. If statistics were kept in those days almost everyone in town would be classified as the working poor, but if you got a new mitt from Spinetti’s Hardware store in downtown Jackson every spring, like I did, you never felt poor. Most young kids would leave home early every summer morning to play with friends, returning home for dinner in the evening.

All shopping was done in downtown Jackson and if it wasn’t available there, you didn’t need it. In fact, in the fifties, everything was centered downtown, including three or four grocery stores, (a hand lingering on the meat scale wasn’t uncommon), and two drug stores, in addition to a hardware store, medical offices and other businesses. Meanwhile, illegal prostitution and gambling brought many men to Jackson, leading to a booming economy. My wife, who as a child lived a few blocks off downtown, would walk down Water St. on her way home from grammar school. She once asked her mother why so many men were going down the alley next to Davies’ garage along Jackson Creek in the middle of the afternoon. Her quick-thinking mother told her they were going fishing. When my wife asked her why they did not have fishing poles with them, her mom replied that they probably left them at the creek the day before.

One night, several local men were arrested working in the illegal casinos by the state police. They were hauled in front of a local judge who looked at them, his neighbors and friends, and then looked at the out-of-area state police and said, “case dismissed,” sending everyone home either happy or mad, depending on where they lived. Jackson was not popular with law authorities beyond the county line. The drinking age for local kids was when their head reached the top of the bar, and one police chief got fired for threatening to close down the illegal gambling and prostitution.

Restaurants in Jackson prospered in those days. One of the most coveted meals of the day was breaded veal cutlets with gravy, which one could get for less than $2 (including tip) at the Louvre. The Pioneer Rex, plus Buscaglia’s and Teresa’s, both in Jackson Gate, overflowed with people many nights of the week. Pierovich’s Boarding House, just south of downtown off Broadway, was a must for Sunday family dining.

The only thing that attracted more people than eating, was drinking. Everyone had a favorite watering hole. The Wells Fargo and the Pioneer Rex were two of the more popular downtown bars. The town’s Catholic priest was caught dealing from the bottom of the deck in the Fargo’s gambling room. As it turned out, he was a card shark from Rio Vista before becoming a priest. It was common to see 10 to 15 drinkers rolling dice in order to find out who would be buying the next round. Then, the loser would roll the bartender, double or nothing. Back then, a round of drinks for 15 would be less than $25. Jackson city police were tolerant to locals at closing time, but little leeway was given to outsiders. Sometimes, when things got rough, two sheriff deputies were well known for their use of night sticks.

Jackson had the only movie theater in the county. In the early 50s, a quarter got you in the door, plus an orange soda and popcorn, and an extra dime was needed for an ice cream sundae at Sophie’s across the street. Teenagers from Sutter Creek sat on one side of the theater, Jackson kids sat on the other side. Girls dating boys from the other town were the only ones allowed on the opposition’s side.

A significant factor contributing to the popularity of downtown Jackson until 1947 was the absence of a highway 88 and 49 intersection as we know it today. Highway 49 ran right through Main Street and took a right where Broadway begins today. Highway 88 began at the corner of today’s Water Street and Broadway, going east toward Silver Lake.

Sports rivalries between Jackson and Sutter Creek High School, (later named Amador High) was fierce. Friendships between boys from different highs schools were uncommon. Anyone who witnessed it will never forget the Sutter Creek/Jackson High basketball brawl of the early 1950s, when Mrs. Popovich, (not a flyweight herself), jumped over the eight-foot high railing of the bleachers to protect her son, George, who was in the middle of the fight that had just broken out on the court.

Plain old fist fighting seemed to be the most popular sport of the day. While fights were common, the reason they occurred was usually forgotten the next day. Several local families were known for having tough sons. Among the more notorious for this trait were the Popovich brothers from Sutter Creek, along with the Roots and Reynosos from Jackson. Later came the Campbell brothers, who if they could not find someone else to fight, would fight each other. Getting your butt physically kicked was a lesson not soon forgotten.